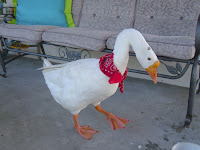 It was a game. Bobby liked to play soldier. Today he had made himself a sword out of a stick. He tried to get his sister to play with him, but this was too rough for her. He chose the family goose for his opponent. He attacked! Around and around they went. It was great fun until he miscalculated, and the homemade sword fell upon the goose' neck. Fear filled his heart as he saw his father's favorite goose lying on the ground dying. His sister didn't help matters as she began to yell, "I'm going to tell daddy what you've done; you've killed his goose."

He had to think of something. Finally he said to his sister, "We'll bury the goose, and hide it and we won't tell anyone." I'll promise to do whatever you want if you will not tell dad about this goose. The plan seemed to work well. He worked out all the details. That night when his father came in, the goose wasn't missed.

Everything seemed to be going well until after supper. When it came time for him to dry the dishes and for his sister to wash them, she said to him, "you're going to wash the dishes and dry them, too. If you don't, I'm going to tell dad." Well, that was all right with Bobby. He thought, once, that's not bad. But this happened day after day after day. He found himself doing not only his work, but his sisters chores. And each day she would say, "if you don't do my share, I'm going to tell dad that I bet you killed the goose." This continued until he could tolerate it no longer.

So one evening when his father was coming in, he met him in the street, and he confessed what he had done. He discovered that the end of the world did not come and that his father was understanding. His father forgave him. He went on into the house for the evening meal feeling like a different Bobby than he had in several days. After the evening meal, his sister said, "if you don't do my part, I'm going to tell." The atmosphere was completely different. He said, "You go ahead and tell. I've already told dad, and I've been forgiven."

I said, "O LORD, be gracious to me; heal me, for I have sinned against you."

Dear Lord, Please forgive us, for we have sinned. In Jesus’ Name, Amen

Email ThisBlogThis!Share to TwitterShare to FacebookShare to Pinterest
Labels: forgiveness