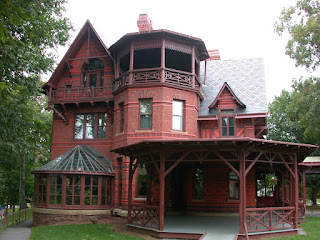 There was once a man who traveled to Hannibal, Missouri, to visit the boyhood home of author, Mark Twain. The house was a "trim, white-washed house with green shutters, set incongruously in the middle of downtown." It cost two dollars to walk around the site. Bryson found the house a disappointment. "It purported to be a faithful reproduction of the original interiors," he writes, "but there were wires and water sprinklers clumsily evident in every room. I also very much doubt that young Samuel Clemens' bedroom had Armstrong vinyl on the floor or that his sister's bedroom had a plywood partition in it."

The house is owned by the city of Hannibal and attracts 135,000 visitors each year. Bryson was disappointed that he wasn't able to actually go inside the house. "You look through the windows," he says. At each window there is a recorded message telling about each room. As he proceeded from window to window he asked another tourist. "What do you think of it?" The friendly stranger replied, "Oh, I think it's great. I come here whenever I'm in Hannibal--two, three times a year. Sometimes I go out of my way to come here." Dumbfounded, He replied, "Really?" "Yeah," answered the stranger. "I must have been here twenty, thirty times by now. This is a real shrine, you know."

They walked and talked some more. His last question to the man was, "Would you say the house is just like Twain described it in his books?" "I don't know," the stranger said. "I've never read one of his books."

Visiting his shrine--but ignoring his books. Doubtless there are many followers of Jesus who are satisfied with that same superficial approach. They visit his shrine, but never read his teachings. God calls us to an authentic relationship with Jesus Christ, which means taking time to read our Bibles.

All scripture is inspired by God and is useful for teaching, for reproof, for correction, and for training in righteousness.

Dear Lord, help us to know you better by reading our Bible. In Jesus’ Name, Amen.

Email ThisBlogThis!Share to TwitterShare to FacebookShare to Pinterest
Labels: study