Is Your Conviction Worth Standing For? 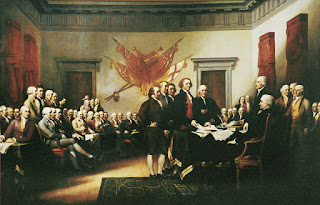 Fifty-six men signed the Declaration of Independence. Their conviction resulted in untold sufferings for themselves and their families. Of the 56 men, five were captured by the British and tortured before they died. Twelve had their homes ransacked and burned. Two lost their sons in the Revolutionary Army. Another had two sons captured. Nine of the fifty-six fought and died from wounds or hardships of the war. Carter Braxton of Virginia, a wealthy planter and trader, saw his ships sunk by the British navy. He sold his home and properties to pay his debts and died in poverty. At the battle of Yorktown, the British General Cornwallis had taken over Thomas Nelson's home for his headquarters. Nelson quietly ordered General George Washington to open fire on the Nelson home. The home was destroyed and Nelson died bankrupt. John Hart was driven from his wife's bedside as she was dying. Their thirteen children fled for their lives. His fields and mill were destroyed. For over a year, he lived in forest and caves, returning home only to find his wife dead and his children vanished. A few weeks later, he died from exhaustion.

As these 56 men had the conviction to stand for what they believed in, let us strive to to stand strong in our faith no matter the cost.

Now faith is assurance of (things) hoped for, a conviction of things not seen.

Dear Lord we come before you asking that we would have the conviction to stand for what we believe no matter the cost. In Jesus’ Name , Amen

Email ThisBlogThis!Share to TwitterShare to FacebookShare to Pinterest
Labels: conviction