Knock Knock Will You Open the Door? 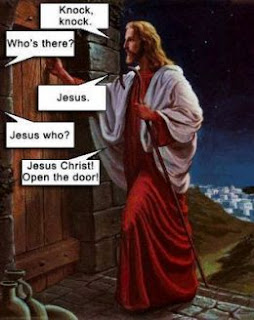 Okay, we probably don't want to admit we have them, but we do. Don't we all have one knock, knock joke that cracks us up at least a little?

Ice cream if you don't let me in !

You have to admit, that's good stuff.

But do you know what's better than the best knock, knock joke? A knock, knock TRUTH. What an amazing truth it is! It's the incredible truth that the Creator of the universe knocks! Revelation 3:20 reminds us of his gracious tap on our hearts:

In the bigger picture, Jesus knocks on the door of his church. He desires to have the sweetest fellowship with the people he died to save. It's almost too wonderful to believe that he wants to live with us in the most personal way, but it really is his knock, knock truth.

Make a difference. Be the one. Answer the door.

"Here I am! I stand at the door and knock. If anyone hears my voice and opens the door, I will come in and eat with him, and he with me."