Is Integrity Your Compass? 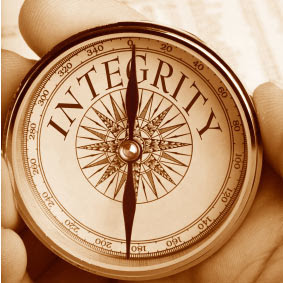 We had a great Sunday School lesson today, we talked about how God is always just and fair. One of the verses we looked up class today was in the book of Psalm where it talks about integrity. It reminded me of a story I read once.

In his book Integrity, Ted Engstrom told his story: "For Coach Cleveland Stroud and the Bulldogs of Rockdale County High School (Conyers, Georgia), it was their championship season: 21 wins and 5 losses on the way to the Georgia boys' basketball tournament last March, then a dramatic come-from-behind victory in the state finals. "But now the new glass trophy case outside the high school gymnasium is bare. Earlier this month the Georgia High School Association deprived Rockdale County of the championship after school officials said that a player who was scholastically ineligible had played 45 seconds in the first of the school's five postseason games. 'We didn't know he was ineligible at the time; we didn't know it until a few weeks ago,' Mr. Stroud said. 'Some people have said we should have just kept quiet about it, that it was just 45 seconds and the player wasn't an impact player. But you've got to do what's honest and right and what the rules say. I told my team that people forget the scores of basketball games; they don't ever forget what you're made of.'"

May integrity and uprightness protect me, because my hope is in you.

Dear Lord , we pray that we would have the integrity to do the things we should even when nobody is around to watch us. In Jesus’ name, Amen

Email ThisBlogThis!Share to TwitterShare to FacebookShare to Pinterest
Labels: integrity