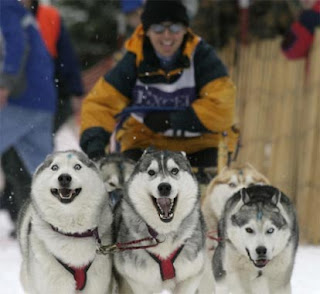 Every year in Alaska, a 1000-mile dogsled race, a run for prize money and prestige, commemorates an original "race" run to save lives. Back in January of 1926, six-year-old Richard Stanley showed symptoms of diphtheria, signaling the possibility of an outbreak in the small town of Nome. When the boy passed away a day later, Dr. Curtis Welch began immunizing children and adults with an experimental but effective anti-dipheheria serum. But it wasn't long before Dr. Welch's supply ran out, and the nearest serum was in Nenana, Alaska--1000 miles of frozen wilderness away. Amazingly, a group of trappers and prospectors volunteered to cover the distance with their dog teams! Operating in relays from trading post to trapping station and beyond, one sled started out from Nome while another, carrying the serum, started from Nenana. Oblivious to frostbite, fatigue, and exhaustion, the teamsters mushed relentlessly until, after 144 hours in minus 50-degree winds, the serum was delivered to Nome. As a result, only one other life was lost to the potential epidemic. Their sacrifice had given an entire town the gift of life.

Two are better than one, because they have a good return for their work: If one falls down, his friend can help him up. But pity the man who falls and has no one to help him up!

Dear Lord, We pray that we will work together as a team so that your love can be shared to those we are around. In Jesus’ Name Amen.

Email ThisBlogThis!Share to TwitterShare to FacebookShare to Pinterest
Labels: together