Would You Give God Your Lunch? 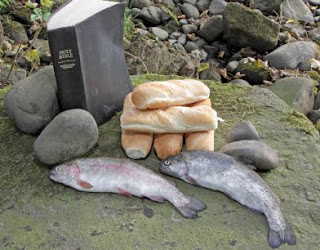 to fill a need which

you never could have filled.

to take you where

you never could have gone.

what you can do

you never could have done.

to let you become who

you never could have been.

One day there was a sobbing little girl standing near a church from which she had just been turned away because it was suppose to be too crowded.

"I can’t go to Sunday school," she sobbed to the pastor as he walked by. Seeing her shabby, dirty appearance the pastor knew the real reason she had been turned away.

Taking her by the hand, he took her inside and found a place for her in the Sunday school class.

The little girl was so touched by what the pastor had done for her, that when she went to bed that night she could not sleep for thinking about all the kids that had no place to worship God.

Some two years later, the child died and the parents of the little girl called for the pastor who had been so nice to her to conduct her funeral service. While at the house talking to the parents, they gave him an old dirty purse that they had found of the little girls.

He opened it up, and inside he found 57 cents and note scribbled in a child’s handwriting. It read, "This is to go to help build the church a little bigger so more children can go to Sunday school.

For two years she had been saving every penny she could find for this offering of love. When the pastor tearfully got through reading the note, he knew instantly what he would do.

Carrying this note and the dirty, ragged purse to the pulpit with him the next Sunday, he told the story of the little girl’s unselfish love and devotion. He challenged his deacons to get busy and raise enough money for the larger building.

Now, the story does not end there! A local newspaper learned of the story and published it.

It was then read by a local realtor, who was so touched that he offered them a parcel of land worth over a million dollars. When he was told that the church could not pay near that much, he offered to sale it to them for the price of 57 cents.

Church members and people who heard this story were so moved that they started making large donations. Checks came in from far and wide. Within a year the little girl’s gift had increased to $500,000, a huge sum for that time (back near the turn of the century).

Her love of Christ and her unselfishness to give all she had, paid large dividends for the work of God. It helped her church grow larger so that more kids could worship God.

If you are ever in the city of Philadelphia, look up the Temple Baptist Church, which seats around 3,300 people, and the Temple University where thousands of kids go to college and learn about God, all of that was made possible through .57 cents.

The bottom line is, Don’t worry about what you have to give. Whatever it is, God will bless and use it to the Glory of God’s Kingdom just as he used the little boys lunch or the little girls 57 cents.

Taking the five loaves and the two fish and looking up to heaven, he gave thanks and broke the loaves. Then he gave them to his disciples to set before the people. He also divided the two fish among them all.

Dear Lord We pray that we will be willing to give you what we have no metter how small we think it is. We pray that you will take it and multiply it so your love and power will be shown to all those we are around. In Jesus’ name, Amen