Are You Ready to Forgive? 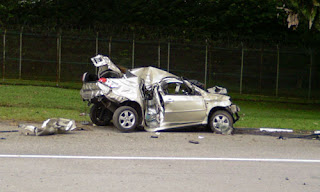 There is a story about the elderly lady who was driving a big, new expensive car and was preparing to back into a parallel parking space when suddenly a young man in a small sports car zoomed into the space--beating her out of it. The lady charged out of her car and angrily demanded to know why he had done that when he could easily tell she was trying to park there and had been there first. His response was simply, "Because I'm young and I'm quick." When he came back out a few minutes later, he found the elderly lady using her big new car as a battering ram, backing up and then ramming it into his parked car. Now he was very angry and asked her why she was wrecking his car. Her response was simply, "Because I'm old and I'm rich."

Anger is easy. Forgiveness requires the grace of God. We are able to forgive because we have experienced forgiveness ourselves.

Forgive us our sins, for we also forgive everyone who sins against us. And lead us not into temptation.

Dear Lord and Heavenly Father fill our heart with your peace in Jesus Christ and empty us of our anger. In Jesus’ Name, Amen.