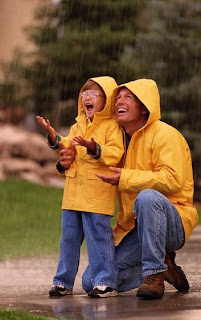 There was a man who recalled a special memory from his childhood. When he was five years old he spent a day with his grandmother, who lived nearby. Toward evening, a fierce storm struck. "Oh, Jim," his grandmother said, "how in the world are we going to get you home in this weather?" And the answer came moments later, as his father walked in the front door. "He had come to get me," he recalls. The wind was blowing; rain was pelting down; lightning was flashing; thunder was rumbling behind the clouds. The storm showed no signs of letting up. It was dark and scary that night. "Our house wasn't far away," he recounts, "but the storm was nasty and getting worse."

His father was wearing a big blue weather coat, and as they prepared to leave, he said, "Son, come under here." He covered his young son with his coat, and out into the storm they went. "Even though it was raining hard, the wind was howling and I couldn't see a thing under that coat, I was not at all afraid," he remembers. "Because I knew my father could see where we were going, so I just held on tightly and trusted him. And soon the coat opened and we were home."

That's what being a loving parent and friend is all about.

Peace I leave with you; my peace I give you. I do not give to you as the world gives. Do not let your hearts be troubled and do not be afraid.

Dear Lord and Heavenly Father, thank you for the peace you give to our life. Thanks for holding us in Your arms when things are to hard for us to handle. In Jesus’ Name, Amen.

Email ThisBlogThis!Share to TwitterShare to FacebookShare to Pinterest
Labels: Parent