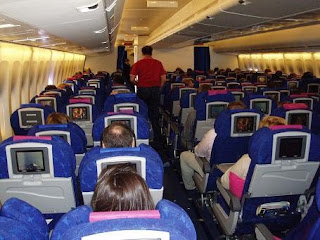 I once read about something hilarious that happened when television was "live." STUDIO ONE was one of the most popular shows in the golden days of live television. During one memorable broadcast, the scene was the interior of an airplane cabin. The scene called for the plane to be at an altitude of 30,000 feet, flying over the mountains of Tibet. Three men were in the cabin talking, when suddenly there was silence. One of the actors had forgotten his lines. Being a live production, of course, there were no retakes, no stopping of the action. That was it. Millions of eager viewers were glued to their black-and-white screens, waiting to see what would happen next. What did the actor do? He got to his feet, in an airplane cabin supposedly 30,000 feet over the mountains of Tibet, and voiced this immortal line: "Well, here's where I get off." He left the set and walked into history.

Sometimes we all get ourselves into situations like that--situations in which the most we can hope for is a graceful exit. And Jesus can give us all the grace we need.

From the fullness of his grace we have all received one blessing after another.

Our Dear Lord and Heavenly Father, show us the way to heed your voice and share the grace you have given to us to those we come into contact with. In Jesus’ Name, Amen.

Email ThisBlogThis!Share to TwitterShare to FacebookShare to Pinterest
Labels: Grace