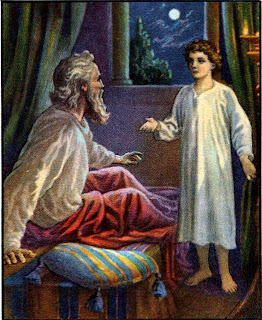 After waking old Eli up for the third time, Samuel goes back to his bed. Samuel would be called one more time that night. This time when God calls: "Samuel! Samuel!" young Samuel pops up saying exactly what Eli instructed him to say, "Speak, for your servant is listening." And God spoke to Samuel.

One reason we might be reluctant to hear God's call is the changes He might require out of us. That night in the Temple God spoke to young Samuel and gave him some disturbing news. Samuel would become a prophet. Eli was on his way out. God told Samuel, "I am about to punish his house forever." God had seen enough of Eli's sons. Samuel would take Eli's place. Samuel probably didn't want to hear this, but God assured him he would not be alone.

We need to understand that if God calls us and we respond, "Here I am," there might be changes in store for us, too. This is a lesson that I need to continually learn, I need to be willing for the changes that come.

That if you confess with your mouth, "Jesus is Lord," and believe in your heart that God raised him from the dead, you will be saved.

Dear Lord and Heavenly Father, as we see the changes in our life help our minds and hearts be open to your leading. May we be open to the changes you have in store for us. In Jesus’ Name Amen.

Email ThisBlogThis!Share to TwitterShare to FacebookShare to Pinterest
Labels: change