Is Your Light Shining? 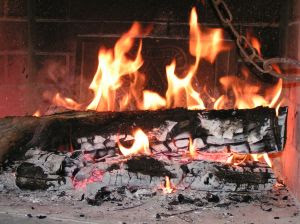 Back in the 1770s or 1780s, a man named John Morris built a house in Rutherfordton, North Carolina. Using flint and steel, John Morris started a fire in his fireplace. And nobody knows why, but it became a point of pride in the Morris household not to let that fire go out. When John built another cabin for his family later on, coals from the original fire were transplanted to the fireplace of the new house. Members of the Morris family proudly declared that they would keep the fire going, to honor the wishes of John, who had charged his family, "The fire must never be allowed to go out."

In the 1920s, the care of the fire rested with one man, William Morris--the great-great-grandson of John Morris. William had never married or had children, and he was nearing eighty. He tried to inspire his nieces and nephews with tales of the family fire, but none of them seemed interested in keeping the fire alive after William was gone. The fire was 150 years old by now. It marked a proud family tradition, one that everyone in the area admired. Would that tradition end once William died?

One day one of William's neighbors came to see him. The neighbor, Hamp Alexander Owen, had only one thing to say that day, "I've come to tell you that I'll keep your fire going." He believed that it was worth preserving.

When Hamp Alexander Owens died in 1948, his obituary stated that he was "the keeper of the Saluda fire." The fire itself had been burning continuously for more than 170 years.

We are the keepers of a fire that has been burning for 2,000 years. Wars have been fought, revolutions have turned history on its head, numerous secular philosophies have claimed their place in the sun, but the flame of Christ has kept shining through the darkness. Will you do your part this year to keep the flame of Christ shining?

"Arise, shine, for your light has come, and the glory of the LORD rises upon you.

Dear Lord, forgive us for the times when I have not shown your light. Give us the strength and endurance to always shine your light to those around us. In Jesus Name, Amen.

Email ThisBlogThis!Share to TwitterShare to FacebookShare to Pinterest
Labels: light