What Are You Doing to Honor the Cross? 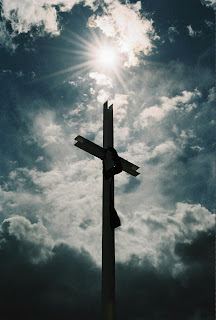 I found this and thought it was so good I had to share it:

During the Second World War there was a young boy in a small town who had to go to the drugstore for his mother. As he arrived at the drugstore, he saw a poster on the front window that made a great impression upon him. It was the picture of an American soldier dressed in full battle uniform lying flat on his face, dead in the sands of a South Pacific island. He was lying there with the ocean cradling his body, and at the bottom of the poster was this question: "What have you done for your country today that's worth this soldier dying yesterday?"

Let's change that scene and go outside the city of Jerusalem to a hill called Calvary and ask you to look on a cross and see the Son of God, the Savior, dying for your sins and the sins of the world. Let me ask you the question: "What have you done for Christ today that's worth what He gave for you on Calvary?"

He himself bore our sins in his body on the tree, so that we might die to sins and live for righteousness; by his wounds you have been healed.

Dear Lord, We pray that you will help us to make a difference today that will bring honor to what you did on the cross for each of us. In Jesus' Name, Amen.